Today morning was pretty bizarre. How would you react if there are two police men standing outside your door and announce that they have a non-bailable warrant against your father from Ghaziabad court?

As my dad wasn't at home, initially I reacted like how a panic stricken person would react but then I decided to be the man of the house and tried to make sense out of a fictionalised nightmare kind of a problem as my dad is a simple sweet humble middle class working man and I don't really think he even has the potential to try out any cool illegal activities. So after much prodding by the three worried ladies in the house, the issue was explained to us. Anyways, so the issue was this-Me and my brother were in our car about two years back and were given a challan for not having a pollution certificate and out of forgetfulness and carelessness we forgot to pay that meager amount of challan that we had to. There was never a further notice after that and obviously it faded from our memory. And for this "crime" they issued a fucking non-bailable warrant!!!!

This is as ridiculous as it gets. Though we have been assured that, thankfully due to corruption, we can deal with this problem easily. Apparently, this has become a common problem. The police guys easily dismiss the cases if you "deal" with them nicely.

This puts me in a strange strange position! I cant get over the ridiculousness and banality of the law in this country which issues a non-bailable ARREST WARRANT for someone who could not/did not pay Rs 400-500 challan for an expired pollution certificate of a car without even a prior notice. I want to thank Corruption for helping poor people like us in bizarre situations like these where we can save our poor little lives by dispensing some hard earned cash!!!!
Posted by payal.k at 10:26 AM No comments:

The show is on time

At the outset, I have to declare that this post is completely inspired by this amazing piece on 'Death of Political Cartoon' published in the Open magazine on 14th August 2010. This is written by a cartoonist himself Hemant Morparia.

In the article , Morparia mentions two cartoonists who are an integral part of the political cartooning "history" of India- Abu Abraham and OV Vijayan. And this is where this post comes into the picture. Have tried to find some old cartoons of these two geniuses. 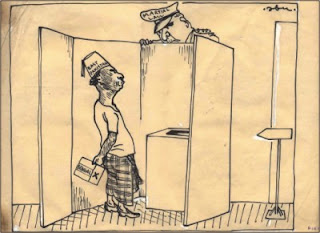 The next one is from Guardian 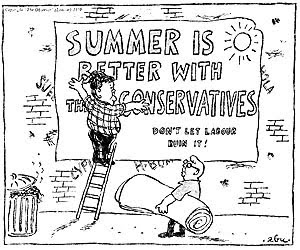 Found some of OV Vijayan's cartoons here and some more here.
Posted by payal.k at 4:59 AM No comments: