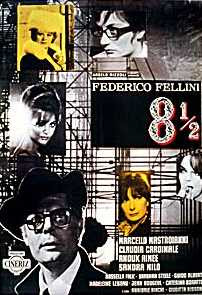 "I really have nothing to say, but I want to say it all the same."

It’s just a coincidence that I recently saw 'Wicker Park' which has a funny reference to Federico Fellini’s masterpiece 8 ½ as it happens to the shoe size of the leading lady in the movie. Josh Hartnett, who plays the lead, cracks an intended non-funny joke linking the shoe-size to Fellini. Just a day and a half later, I got my hands on Fellini’s movie.

According to the way I understand the concept of surrealism, I would call this movie a surrealistic expedition. Well, those of you who are familiar with the movie would know that the title comes from the number of movies that Fellini had directed till then. This movie was supposed be his 8 1/2 th movie.

I, as usual, would not delve into the story of the movie as that would be a complete injustice to it. The only thing I can say is that it is a semi autobiographical movie based on the “life” of a director and the movie project that he has currently undertaken.

The opening scene where the spirit leaves the cocooned and claustrophobic car to reach the sky and then to be pulled down again is enough to make you sit back and absorb the screen.

The construction and narration of the movie are a part of each other and are inseparable. The movie flows backward, forward and into the subconscious and sometimes into the really deep dark worlds. There are themes of personal conflicts, people that the director is associated with, spirituality and vague and distinct childhood memories.

After a long time, I have watched a movie which has left an indelible mark on me. I really fell in love with it. Must watch.

"And how do you benefit from stringing together the tattered pieces of your life? Your vague memories, the faces of people that you were never able to love..."
Posted by payal.k at 12:22 AM No comments:

I have confessed enough to people I love
Some try to love me
One I wait for, in vain

I am weaving a dream
The curses have passed through it all
Now it’s time to move on
It is a beautiful painting
I fight existence and walk into the dream
Posted by payal.k at 5:04 AM No comments: 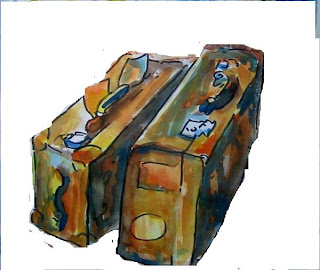 I think one of the toughest and bravest decisions I have taken in my life so far is to move back from Bombay to Delhi after five years. I started my work life in Bombay after doing my post grad from Xavier's! It sounds like a cliche now but I feel I have actually grown up in Bombay. I have had the most good times and some of the most bad times in Bombay.

Not that Delhi did not offer me its share of experiences. After all, I have been born and brought up in this city. However, may be I was too cocooned and too naive till the time I was in Delhi. Bombay made me grow up and learn things on my own. The last five years have introduced me to so many interesting and so many weird people. Some of the people from each category will be friends for life.

This blog post is not exactly supposed to be a nostalgic trip to the past. This is to look forward to my time in Delhi. I want to explore the "artistic" and creative side of Delhi which I have not explored till now. I want to make the most of this "comeback". Excited!
Posted by payal.k at 12:27 AM No comments:

It was the day for new love
Fresh like water drops on cherries
Crispy red and gorgeous
I met him after ages
I knew I will be in love all over again
I was in love
All over again
It wasn't the same though
It was a mended heart
It was a broken heart
The world seemed to be snoring around me
Or so I wished
It was just the night and me
And my love
New Love
Strange and natural as night dreams
Posted by payal.k at 6:49 AM No comments: 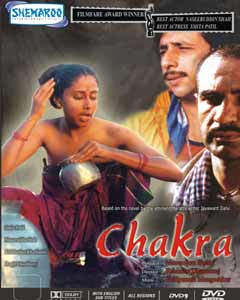 The reason why I particularly want to write about this movie is that it sort of, in a weird way, resembles French style of cinema, fluid and extremely broad minded. Ironically, the story is set in Bombay's shanties. It essentially has three main protagonists: Smita Patil, Naseeruddin Shah and Ranjit Chowdhary.

One of the few scenes which really impressed me was when Smita Patil has a casual fling with Naseeruddin Shah, the local goon who is a regular at her house and is a role model to her teenage son and that same night she asks him to leave the house when her "lover" Kulbhushan Kharbanda is back. Its interesting that even though she is having a stable affair with Kharbanda who is a good potential husband for her, she doesnt even think twice before giving into the temptation of having casual flings with Lukka. The most amazing part is that its all woven as an absolutely normal part of life. No guilt. No remorse. Lovely.

The other scene which seemed almost psychedelic to me was the entire village (Including all the women) getting drunk after someone in the village has passed away. It is a custom there that the person whose kith or kin has died will treat the entire village to a round of drinks. The whole village is tripping, some are expressing sorrow, some are lost in their own world and some express lust and love. Its a really interesting scene.

I think its an extremely interesting movie made in early 80s. One of Smita Patil and Naseeruddin Shah's best!!! Must catch it if u can. It is directed by Rabindra Dharamraj.
Posted by payal.k at 1:32 AM No comments: