This is going to hurt just a little bit

This absolutely painful and unwanted wisdom tooth just reminded me of this wonderful, funny and insightful poem by Ogden Nash, about those dreadful visits to dentists :) Enjoy

THIS IS GOING TO HURT JUST A LITTLE BIT
One thing I like less than most things is sitting in a dentist chair with my mouth wide open.
And that I will never have to do it again is a hope that I am against hope hopan.
Because some tortures are physical and some are mental,
But the one that is both is dental.
It is hard to be self possessed
With your jaw digging into your chest,
so hard to retain calm
When your fingernails are making serious alterations in your life line or love line or some other important line in your palm,
So hard to give your ususal cheerful effect of benignity
When you know your position is one of the two or three in life most lacking in dignity
And your mouth is like a section of road that is being worked on
And it is cluttered up with stone crushers and concrete mixers and drills and steam rollers and there isn't a nerve on your head that aren't being irked on.
Oh some people are unfortunate to be worked on by thumbs,
And others have things done to their gums,
And your teeth are supposed to being polished
But you have reason to believe they are being demolished.
And the circumstances that adds to your terror
Is that it's all done with a mirror,
Because the dentist may be a bear, or as the Romans used to say, only they were referring to a feminine bear when they said it, an ursa,
But all the same how can you be sure when he takes his crowbar in one hand and mirror in the other he won't get mixed up, the way you do when try to tie a bow tie with the aid of a mirror, and forget that left is right and vice versa
And then at last he says, That will be all, but it isn't because he then coats your mouth from cellar to roof
With something I suspect is generally used to put shine a horse's hoof,
And you totter to your feet and think, Well it's over now and after all it was only this once,
And he says come back in three monce.
And this O Fate, is I think the most vicious that thou ever sentest,
That Man has to go continually to the dentist to keep his teeth in good condition
When the chief reason he wants his teeth to be in good condition is so that he won't have to go the dentist.

By Ogden Nash
Posted by payal.k at 9:14 AM No comments:

Email ThisBlogThis!Share to TwitterShare to FacebookShare to Pinterest
Labels: Ogden Nash, Poems, This is going to hurt just a little bit 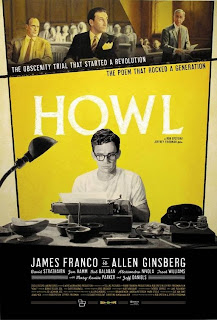 James Franco starrer Howl is an interesting amalgamation of Alen's peotry (Howl) recital, the court case against the "obscenity" in the poem, Alen's important relationships, Alen's interview and Alen and Howl's vision expressed through surreal animation.

Honestly, while I was watching the movie, I was just mesmerized with the poem more than anything else. At each and every point, I kept thinking that it is so fucking relevant today and its almost a crime to not have read it till now. The entire film-making-acting part got overshadowed completely with the poetry recital session. The discussions in the court were interesting. Critics are portrayed in two categories-one those who get orgasms by just censoring, critising literary texts and the other camp of those who accept writers the way they are. They delve deep and deep in trying to understand what a writer/poet is actually trying to say and accept the fact that writing, especially poetry is open to all kinds of interpretation.

Anyhow, forget all that. For now just read 'Howl' if you have not read it before. Click here
Posted by payal.k at 2:03 AM No comments:

Ladies and gentlemen, here's presenting Bret McKenzie and Jemaine Clement, two New Zealanders who are the band members of this most rocking musical band and actors of this most awesome show 'Flight of the Conchords'. The subtle humour, the awesome music, the funny lyrics, good looks (applicable only to Bret ;)), they have it all going for them. And the icing on the cake is their "efficient" band manager, who is from New Zealand too and their only fan and stalker, Meg, who is not from New Zealand.Read about their band and the show here.

And watch one of the clips from the show here

And this one is one of my favourite songs:

Email ThisBlogThis!Share to TwitterShare to FacebookShare to Pinterest
Labels: Bret Mckenzie, Flight of the Conchords, Jemaine Clement, Recommendation of the week

Of lifts and escalators 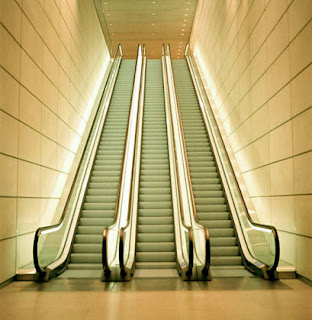 The first time I ever took an escalator was in one of the malls in Gurgaon. I was in college that time. While my two friends easily stepped onto it like they were born to just hop onto elevators, I kept standing there just visualizing how easily I could trip or probably even get crushed somehow and die a slow painful death on that scary escalator. As I was getting all gory with my visual details, a security guard LITERALLY picked me up and planted me on the escalator's first step. It wasn't so bad after that. But even after years and years, it is truly an outlandish sight whenever I get onto an escalator. It is like one of those do or die situations for me when I hop onto it and get out of it. It is a like a mini-mission-accomplished moment and I really wish somebody knew what I went through during those few seconds and would give me a mini award for that. I am sure there are other weirdos like me.

About lifts. It is a different kind of phobia. It is basic claustrophobia. Most lifts are so tiny. Even if they are slightly bigger, a lot of people get into them. And then you experience a few seconds of extreme uncomfortableness. People don't smile at all, which makes the situation worse. Those who even know each other just avoid any conversations in the lifts, usually. Everyone keeps staring at the numbers which tell you how many more floors it would take for you to finally get rid of the mini-trauma. If you spot someone cute, you can't even check them out because lifts , like I said, are effing tiny. Whatever you see in those stupid films and TV commercials about subtle flirting with eyes and shit between a boy and girl is complete nonsense. That never happens in real life lifts. Lifts lack that character. If you are stuck with someone with a case of a BO, then you are doomed. It is smelly claustrophobia then. And if you are someone crazy like me and devil forbid, the lift ever gets stuck somewhere (It is a hypothetical adaptation of a true story) then you are fucked. It will take you many many days to use that monster again.

One thing I am not scared of is stairs. Plain and simple stairs. They shouldn't be spiral though. There should always be a railing next to the stairs. And it shouldn't be raining while you are climbing steps. In all these cases, you can trip on them. And you can trip real bad. You can even break your lovely bones. You can break your teeth. You can get a bump on your head. But in all normal circumstances, I do not have a phobia of stairs.
Posted by payal.k at 11:45 PM 3 comments:

Voice to be reckoned
Pure and complicated

Admist jazz and others
Wine poured in a perfectly shaped glass
Absorbed by a parched throat
Savored till the last drop
Long after it was over
Posted by payal.k at 1:50 PM No comments:

Email ThisBlogThis!Share to TwitterShare to FacebookShare to Pinterest
Labels: Music

Haha..I should really stop calling this 'Recommendation of the week" cuz I post it like once in two-three weeks. Anyhow,for now we would go for this.

So "this week's" recco are basically this two great write-ups on two great people. Both great in very very different ways. Both are HIGHLY undeestimated, even now!!!!

More on the people later. For now, I will simply post these write-ups for you

I will get back to you on why have I posted these..Do read them. Like I said, these are brilliant write-ups on brilliant people!
Posted by payal.k at 10:36 AM No comments: