Sometimes I wonder about the times when we have dreamless nights. Well, Laurie Anderson would made me believe that on those nights we are in someone else's dreams. The dreams themselves are a mind-blowing phenomenon. Some of the mornings, I curse myself for not remembering the dream sequence because I am quite sure that it would have made the plot of the next Steven Spielberg's blockbuster!

Have you ever felt something slipping through your fingers- a wedding ring or sand or water or happiness or optimism or life. People often wish that life was a scene of a movie- someone was directing it as a rom com probably-light-hearted with a happy ending. Probably even a melodrama, albeit with a happy ending. Sometimes I wonder what if my life was a book written by Haruki Murakami. Magic realism and an abyss for an ending which has no end. That would be truly spectacularly strange. Strange in all its glory. Not the sarcastic strange. Every feeling at the deepest level and yet so fucking distant from reality.

Anyhow, what else. Have you ever felt that you have just so much to offer to people or probably to someone in particular and yet you are so caged. Caged with thick invisible bars. And the world would call you something nasty if you broke the fucking bars which dont even exist. You will act insane just because you dont want to be called insane. When did mystery become such a negative word, I wonder. I don't know what you are thinking, it could be romantic if it is romantic. If it is not romantic, then for sweet devil's sake I should know. Right? That was rhetorical by the way.

I absolutely love it when strangers smile at me (not the creepy ones) or at each other. Or when you get to hear some stranger's entire life story during the course of a train journey from Mumbai to Delhi. One night of a chance encounter in a bar leads to zillions of nights together. How do you reach out to a stranger with whom you identify with like you have never identified with someone before. It could just be a window to gaze through and see yourself from a distance. Or probably someone as human as you are, waiting to melt into someone's arms.

Also, a random someone could probably give you some of the life's biggest answers and I would never call that a chance encounter. Well, its a strange strange land!

PS: The new name of the blog is inspired by this wonderful composition by Elliot Goldenthal:
Posted by payal.k at 10:14 AM 3 comments:

Must check out Laurie Anderson's other tracks if you like this one. She is absolutely out of the world. Highly recommended :)

Email ThisBlogThis!Share to TwitterShare to FacebookShare to Pinterest
Labels: Recommendation of the week

A subtle intimation of a love letter,
Blank, crisp and precise.
No bottled feelings.
No painful cries.
Like freshly melted glaciers,
Not the stale river.
It floats in the thin air,
While I avoid all contact.
It settles down on my bench,
Sits their lonely and hopeful.
It slowly sips the dew drops,
While I drink some rum.
The whiteness of the paper gloats.
I fall and I fall,
Until there is no hope.
I finally take it in my hands,
And read that splendid blank love letter.
Posted by payal.k at 9:37 AM No comments:

That Girl in YELLOW BOOTS 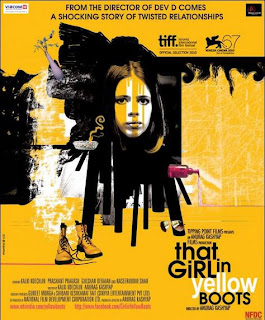 I changed the name of my blog from Absurd to Yellow Boots last year. This was mainly for two reasons: I loved the title of the movie (which was in the making at that time) and it was a sort of a tribute to one my my MOST favorite directors Anurag Kashyap.

I finally went for the movie yesterday, brimming with expectations. The promos had been promising and more importantly, its an Anurag Kashyap film. 15 minutes into the movie, we were introduced to the main character Ruth (played by Kalki Koechlin) and various other characters. I was patient and waiting for interesting events, plot, characters et al to unfold gradually. Next few more minutes into the movie, more characters are introduced and I was still being patient. Half of the movie was over when I started to have my doubts.

The movie falters at various levels. The wishy-washy plot coupled with loopholes deteriorated the condition of the movie. Kashyap gets some of the finest actors on screen and then throws them into a blackhole, never to be retrieved again. Come on, how can you get Piyush Mishra in the movie and give him one dialogue. How can you give a 5 seconds "special appearance" role to Rajat Kapoor. How can you make Naseeruddin Shah's character such a dispensable part to the plot. All these characters' "special appearance" seems like a mere gimmick. Its like Karan Johar using getting Kajol and Rani Mukherjee to make a special appearance in the dance numbers of all his movies! That is still alright. Those are Karan Johar movies but Kashyap doesn't really need to resort to such tactics.

Some really interesting characters emerge but they are so half baked that you feel bad for the awesome actors playing them. Two such characters are Chutiappa (a local gangster) and the massage parlor owner (Don't know her name). Some characters do zilch for the plot or the movie. One such character is the guy who appears twice to collect bribe from Kalki and we are never explained why. Altercations between Kalki and her druggie boyfriend are vague, uninteresting and forced!

On the brighter side, the movie has been shot beautifully. The cinematography is excellent. But somewhere the movie is hollow. At the risk of using a cliché, I would say it definitely lacks the soul. The final twist in the plot does nothing for the movie. Its contrived just for the sake of it. It tries to shock but it doesn't. Nowhere in the movie, the protagonist evokes any kind of emotion (except for making you really irritated with all the above mentioned reasons). She is definitely not strong or riveting as a character and as an actor, for that matter. Overall, a highly disappointed movie from Anurag Kashyap. However, I STILL am a big fan. Can't wait for his next movie.

Strangers who faked identity every night
For smiles, kisses, wine and other delights
Posted by payal.k at 2:22 AM No comments:

Why do people have to be this lonely?

"Why do people have to be this lonely? What's the point of it all? Millions of people in this world, all of them yearning, looking to others to satisfy them, yet isolating themselves. Why? Was the earth put here just to nourish human loneliness?"

Recommendation of the week: Lovely & Amazing 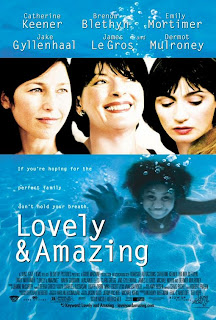 I had sort of stumbled upon a movie called Friends with Money a couple of years back and for the first time Jennifer Aniston was no longer Rachel for me. That was her best performance that I had ever seen (This was followed by The Good Girl ofcourse, where she has once again done a splendid job). And recently, thanks to a friend, I discovered the movie Lovely & Amazing which is by the same director who created Friends with Money-Nicole Holofcener. It is an extremely sweet and sensitive film which tries to delve deep into the female psyche and explore its grey shades. It stars extremely talented Catherine Keener (who features in all Holofcener films till now), Emily Mortimer, Brenda Blethyn, Jake Gyllenhall (who plays the one of the lead characters in The Good Girl too opposite Aniston) etc.

The film mainly deals with female insecurities through a mother, her two daughters and an adopted black daughter. The best part is that somehow Holofcener manages to justify so beautifully what apparently look like irrational insecurities. It is a sweet little movie which is not too dark and yet it doesn’t just scrape through the surface. It goes as deep as it can while leaving the audience on a positive note. Holofcener is definitely quite an interesting filmmaker and I am really looking forward to watch some of her other movies including the most recent one, Please Give.