When a man walks into a room, he brings his whole life with him

"When a man walks into a room, he brings his whole life with him. He has a million reasons for being anywhere, just ask him. If you listen, he'll tell you how he got there. How he forgot where he was going, and that he woke up. If you listen, he'll tell you about the time he thought he was an angel or dreamt of being perfect. And then he'll smile with wisdom, content that he realized the world isn't perfect. We're flawed, because we want so much more. We're ruined, because we get these things, and wish for what we had."

Lost the old drafts,
That marked the beginning of love.

We all died a little inside,
And donned a new life.
We gasped,
Look terribly amazed,
Re-lived what never happened.

Words spun over by centuries.
A short story,
That never ever ended.
An epitaph poem,
Where the poet stayed alive,
The poem was buried.

Kept writing,
On loose white sheets,
Crisp and benign.
A start to the end,
Of our new found lives.

Email ThisBlogThis!Share to TwitterShare to FacebookShare to Pinterest
Labels: . Poems 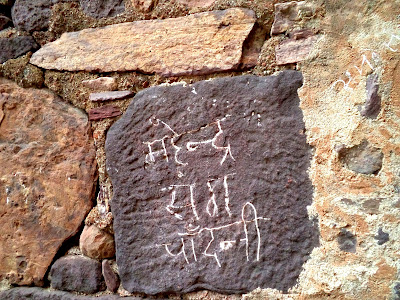 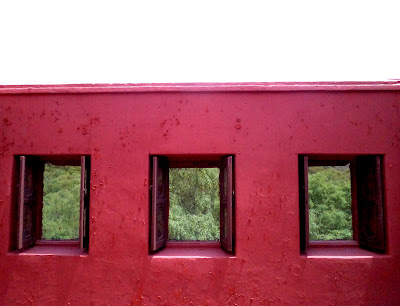 Before I went to Ranthambore, I don’t think I had ever heard so much silence before. The ride from Jaipur to Ranthambore was blissful. While my driver Dinesh played B-grade Hindi film songs in the background, I was immersed in F Scott Fitzgerald’s creation of rise and fall of passion between Rosemary and Dick Diver for about an hour of the three hour journey. The drive took me through some interesting places. Green fields, mud huts, cattle, dung, cycles, women sitting on the side of the road as if they were born to do that, colors, yellow, orange, dark pink, turbans. I had been to Rajasthan so many times before but there was some new vibe to all this, as if someone had just increased the contrast of all the imagery. 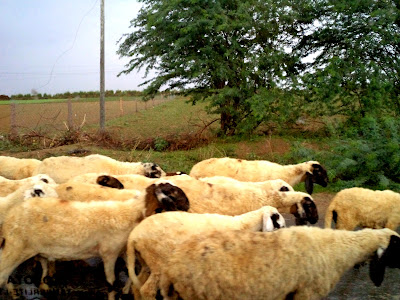 The silence on the terrace of my hotel ‘Castle Jhoomar Baori’ introduced me to a version of silence that I never knew before. This silence was really overwhelming. It screamed. It spoke to me. It even said sweet nothings to me. It took us about five minutes to become friends. Wind accompanied the silence. At the cost of sounding like a narcissist, if I have ever secretly felt like a royal queen, it was the moment I stepped onto this terrace. This was created for me, I thought. The wild animals made music. The jungle, which surrounded me as my hotel was almost in the middle of it, gave me the privilege to see it in all its abundance, in all its glory.
The hotel itself was full of all kinds of crawlies. You name it. Lizards, spiders, leeches, snails, ants, big ants et al. They all crawl so proudly like they belong there. And somehow I did not feel scared of them. You know how it is. You always admire things which have this sense of belonging, which we encounter so rarely. If at all, I felt like an intruder in their cosy lives. 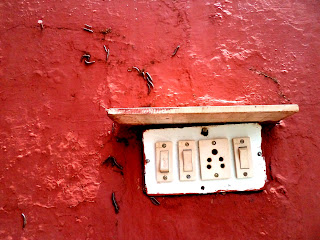 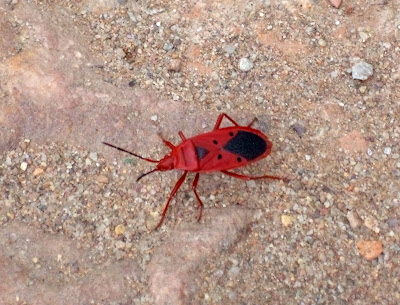 The hotel was this sort of an old haveli turned into a commercial place. It had a very rustic feel to it. Sometimes, an eerie feel too. The nights can be tough if you are all alone in a suite called ‘Tiger Suite’ and they put a bedsheet in your room which looks like this!!!! Yes, I removed it within two minutes after I clicked this picture. 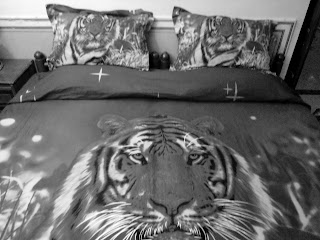 It had some interesting paintings too. This is my favourite. Check out the woman sitting by the window. What a beautiful image of melancholy and longing. An ignored queen. It even prompted me to ask an important question to a friend. “Is mutual love really important in life?”  He told me that it is not, but I will forever feel it is and this space in between is where all the literature will come from.I still am not sure if I believe him, which ironically proves what he said! 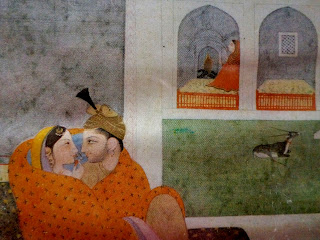 Anyhow, Ranthambore Fort was another lovely place. It is a spectacular collage of ruins. Each and every part more mesmerizing than the other. It was a stairway to a lot of lovely pictures, portraits and also a lot of friendly apes. 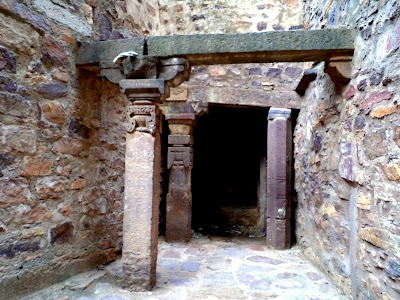 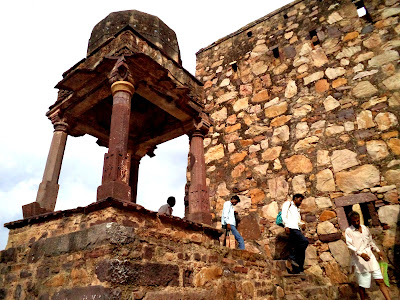 The bottom of the sea

Deep deep down
About to reach the bottom
Of the sea

Deep deep down
About to reach the bottom
Of the sea

So at this lovely place called French bakery ('Baba Au Rhum' is its actual name), I stumbled upon these series of short books by someone called 'Sunny Jetson'. These books have clearly been written during a massive trip. My guess is acid. Anyhow, these books have some of the most wildly random stuff I have ever read. About Reindeers pissing in beer bottles etc. Even the passage below is kind of weird trippy but I loved it.


The Pleasure of Time. 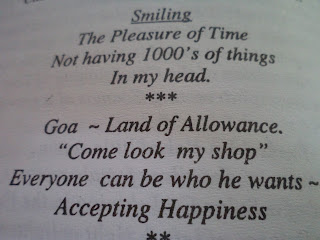 Someone recently said to me that French, the sound of it, is like love-making. A magical song. Heart-breaking words. And Julie Delpy!

The Curious Case of the Unwanted Lizard

I am not particularly scared of lizards. Dogs. Well, that is another story. When it comes to dogs, I think Chandler's theory of my-neck-is-exposed-and-he-can-sense-my-fear is the closest theory I have come across to explain my rational fear of being around dogs. Anyhow, lizards! So most of the houses I have stayed at in my life so far- four in Delhi and four in Mumbai have had lizards. Small. Big. Medium. Light brown. Dark brown. While my mother has been the most daring in our family to "shoo" away those crawlies, I have distinct memories of my dad screaming for my mother's help at any sighting of a lizard.

I don't get scared because they are usually crawling at a remote corner of some wall in the house and generally, I don't have much stuff to do on the walls except for stare at them for some philosophical pondering. So often me and many lizards have had eye contacts and a smile or two has been exchanged too but beyond that there has been an understanding of a peaceful co-existence. And come to think of it, they are not even ugly and full of germs like cockroaches or catty and annoying like rats etc so they have almost always been welcome in my various houses, much to the dismay of many of my guests.

However, things have changed now. Now I live in a Really tiny studio apartment, on my own. Each and every corner and inch of the space in this house is accounted for. Only the things, people and creatures who I want to be around are invited to this place. After about a month of moving to this abode, something happened, which finally changed what I have often felt or not felt about lizards.

She is bigger than any other lizard I have encountered so far. And to be fair to her, she might appear larger than life because of the super tiny size of my apartment. Some rules of proportionality need to be applied here. From nowhere, she pops out like a lightening bolt , scares the fucking daylights out of me and eventually put me on the risk of my impending heart attack. As you would probably know, sudden fear and shock is the reason of about 65% of the heart attacks in this world.

Since she moves almost at the speed of light (If I can just exaggerate a bit), it is impossible to get any photographic evidence for the professional exterminator if I choose to call one. At one point, I even considered shooting a documentary on her life but because of her rapid movements it is very difficult to zoom in, zoom out and also follow her around. She avoids all eye contact now and obviously we have moved beyond the stage where we can even think about smiling at each other. So finally I have changed my views about having a lizard in the house. You are not welcome in my house anymore lizzy-missy. I am all set to take some drastic steps about this one in particular and in the process if other lizards get upset with me too, inspite of my good behaviour with them over the years, then I am ready to bear the consequences.


Found this lovely letter on www.brainpickings.org by John Steinbeck who had written this to his teenage son who had fallen in love. It is absolutely beautiful and worth many many reads.

New York
November 10, 1958
Dear Thom:
We had your letter this morning. I will answer it from my point of view and of course Elaine will from hers.
First — if you are in love — that’s a good thing — that’s about the best thing that can happen to anyone. Don’t let anyone make it small or light to you.
Second — There are several kinds of love. One is a selfish, mean, grasping, egotistical thing which uses love for self-importance. This is the ugly and crippling kind. The other is an outpouring of everything good in you — of kindness and consideration and respect — not only the social respect of manners but the greater respect which is recognition of another person as unique and valuable. The first kind can make you sick and small and weak but the second can release in you strength, and courage and goodness and even wisdom you didn’t know you had.
You say this is not puppy love. If you feel so deeply — of course it isn’t puppy love.
But I don’t think you were asking me what you feel. You know better than anyone. What you wanted me to help you with is what to do about it — and that I can tell you.
Glory in it for one thing and be very glad and grateful for it.
The object of love is the best and most beautiful. Try to live up to it.
If you love someone — there is no possible harm in saying so — only you must remember that some people are very shy and sometimes the saying must take that shyness into consideration.
Girls have a way of knowing or feeling what you feel, but they usually like to hear it also.
It sometimes happens that what you feel is not returned for one reason or another — but that does not make your feeling less valuable and good.
Lastly, I know your feeling because I have it and I’m glad you have it.
We will be glad to meet Susan. She will be very welcome. But Elaine will make all such arrangements because that is her province and she will be very glad to. She knows about love too and maybe she can give you more help than I can.
And don’t worry about losing. If it is right, it happens — The main thing is not to hurry. Nothing good gets away.
Love,
Fa